I have been visiting my favorite shops across New York City and trying to support them by picking up a few things whenever I can. Next up for me was Compleat Strategist, a board game store in Midtown. This shop was right by where I worked so I used to go there a lot. Anyways I picked up a few things including this pack of DC Comics HeroClix Justice League Unlimited.

I love, love Justice League Unlimited. You just never know which superhero would be featured in the episode. I know basically everything about Batman’s origins but how about the Shining Knight? One group that I was a huge fan of (and I don’t quite know why) is the Seven Soldiers of Victory and they starred in one of my favorite episodes. Thus even though I haven’t really collected Heroclix for quite some time, I wanted to check out this set. There aren’t many products that advertised the Seven Soldiers of Victory on the box! 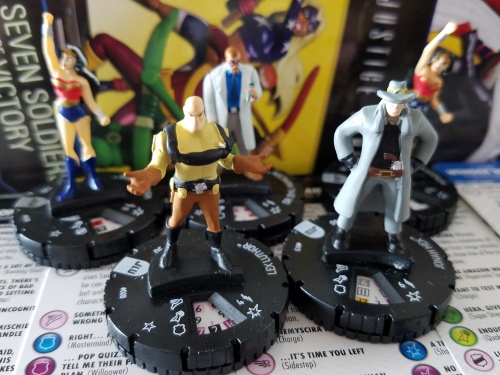 I pulled a Lex Luther, Jonah Hex, Dr Emil Hamilton and two Wonder Woman figures. I didn’t pull any of the Seven Soldiers of Victory but the Wonder Woman from the future seems like a start of fun team. It is so hard to get a game of Heroclix in especially nowadays but I really want to try to test some of the new figures I got.

All in all from what little I have seen, I am surprised Wizkids didn’t make this set earlier.

Filed under Board Games, Collectibles