I recently got a bunch of Beyblade tops and an arena. I was also interested in the fake Beyblade tops that I see for sale in discount shops near me. Why? A)- It was very cheap. B)- I really wanted to see how it performs against the real deals. I got I guess what you call a starter set and a single top pack. 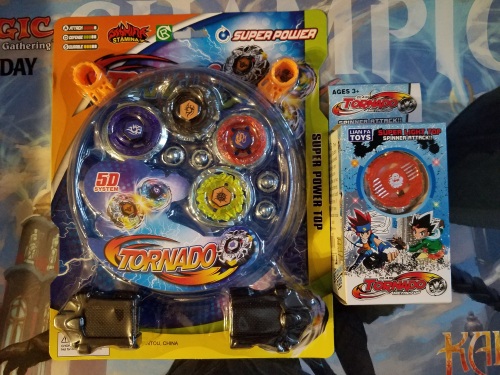 The only ways you can customize the tops in the starter set is by changing the performance tips but taking a look at the tips they give you I doubt it will change anything. The tops themselves are very cheap feeling. They are super light and doesn’t spin well. The starter set and the single pack all came with a launcher. The launchers actually work pretty well for the most part but one rip cord does snag a bit so you don’t always get a smooth launch with that one. The top in the single pack is actually a bit better in quality than the other tops. It has a lot more weight to it and spins way better. It also lights up when gets hit which I think is a nice touch. I also like that the starter set comes with a little arena to battle with. I was actually looking for a smaller, more portable arena than the big, bulky Beyblade one that I got. But it sucks that this arena is paper thin. I just put some duct tape on the center of the arena and I expect to use until it breaks because it easier to find space for it.

So how do the Clash Tornado metal tops perform? The starter set tops are garbage as expected. The single pack one though can beat some of the Beyblades here and there and it wins against the Air Knight K4 every time which is surprising. It seems like it good for attacking but has very little stamina when gets hit back. (I actually just got another single pack from the store. This one feels even heavier and it is taller with wider metal wings. I gave it a few launches and it already feels like it is the best of the bunch.)

All in all for the tops, Beyblade is way better and the single pack tops with the lights are significantly better than the starter set ones. The launchers between the two are comparable but they are not interchangeable. I only have one Beyblade arena but that arena has a nicer quality although it still feels cheap.