More and more Pokemon products and promos are coming out in celebration of their 25th anniversary. I have picked up a couple of Pokemon TCG packs from McDonald’s Happy Meals already (I am 17/25 in completing the set and no foil Pikachu yet). I have been also looking at the cereal aisle for the General Mills cereal Pokemon TCG packs and I finally found one supermarket that had it. They only had Cinnamon Toast Crunch though and I honestly have never tried it.

The pack comes with 3 cards and one of them is guarantee to be a foil Pikachu with the 25th anniversary logo which is a great thing, saving me from having to buy boxes and boxes of cereal I don’t really want. Also a Galarian Ponyta in the set is exclusive to Cinnamon Toast Crunch boxes. 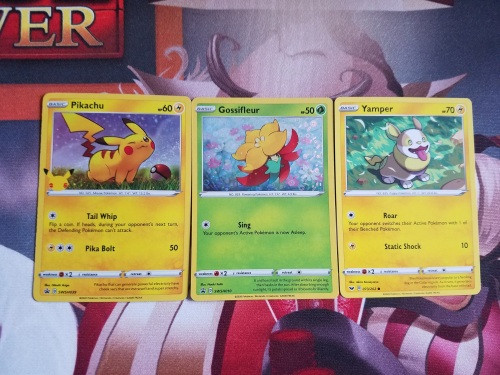 So in my pack I got a Pikachu, a promo Gossifleur and a Yamper. I actually own a couple of copies of the Gossifleur promo and the Gossifleur in this set has a slightly different foil pattern. Pikachu is the only card in the set with the 25th anniversary promo and you can’t tell the reprints apart other than the foil pattern. (Non foil cards are identical to cards from the original sets.)