I got this collector’s mystery box a long time ago and it was sitting at my desk ever since. This mystery box has 15+ collectible items that has over $50 in value for $16. I remembered there was also a bigger box which has a bunch of stuff for $35 (that’s too much) and there was also a smaller version I have seen for $6 (which I have gotten a couple of times). You just never know what you can find in these boxes. 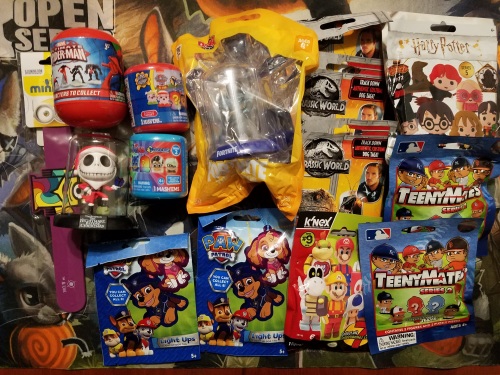 This was actually a better mix of stuff compared to other collector’s mystery boxes I got in the past.

I was really only excited about the Super Mario K’nex figurine. I was part of a Mario RPG campaign so I may be able to use the Mario figure one way or another whenever we meet again. I also opened the Domez figures, Ultimate Spider-Man capsule and the Jurassic World Dog Tags. The Spider-Man capsule was really hard to open and I think I got one of Ultimate Spider-Mans. I was hoping to get a dog tag with a piece of an authentic costume from the Jurassic packs (I didn’t). Everything else I am probably going to keep sealed and maybe use them as giveaways during my board game nights in Bryant Park (again whenever we can meet again).

I picked up another mystery box that promise 6+ items worth over $20 in value. 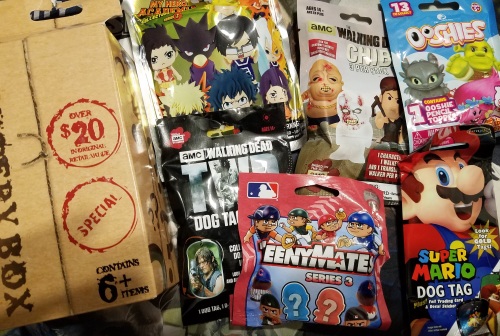 There are a bunch of dog tags in this repack again but overall I am a lot happier with the packs and selection than last time around. Here is what I pulled.

I am keeping the My Hero Academia collectors bag clip sealed. It can be a nice gift. I am also pretty excited about the Walking Dead chibi figures. But these chibi figures are quite cheaply made. There are really noticeable air bubbles in the clear zombie figure. But I am thinking I can use them one day as miniatures for a zombie board game. Just those two packs alone are worth the $5 I spent.

I am running a Star Wars RPG campaign (using Fate Accelerated system) and I had to get some Star Wars DVDs for “research”. Anyways I just happen to get enough Disney movie reward points for a mystery DVD. It could be anything!

And my DVD is Million Dollar Arm. Honestly I never heard of the movie but I remember seeing the story that inspired it on SportsCenter (cricket players being scouted for baseball). I always find the business side of sports fascinating so it should be right in my wheelhouse…

The movie is meh. It is kind of slow paced and super predictable. Every good underdog sports movie needs a good rival and the rival in this movie is kind of abstract (coming to America or maybe time?). Also it is kind of hard to care about the main character. He not big enough of jerk to hate him and he is not interesting enough of a character to root for. The real life story that inspired this movie is really not interesting enough for a whole movie. This movie could have easily been a made for TV movie or an ESPN special.

I got a 1st place medal which I can definitely give away in my next Catan tournament at Bryant Park, a tentacle finger thing, a way to strap your smartphone to your arm and THE ugliest phone case for an iPhone case.

So it is a bunch of things you don’t need… but are definitely conversation starters which honestly describes almost everything for sale at Flying Tiger Copenhagen.